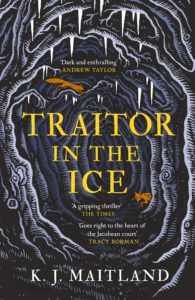 My new historical crime thriller, Traitor in the Ice, is the second in the Daniel Pursglove series, and finds Daniel still in pursuit of Spero Pettingar, the only gunpowder conspirator who escaped the clutches of spymaster, Robert Cecil. Daniel is ordered to inveigle his way into Battle Abbey, which in 1607 was home to a remarkable widow, Lady Magdalen, Viscountess Montague. At nearly 70, Lady Magdalen defied the authorities by hiding fugitive Catholic priests within her household, smuggling Catholics in and out of England, and holding forbidden Masses in her secret chapel for as many as 120 people, all right under the noses of those sent to trap her. Daniel is dispatched to Battle to uncover proof of treason, but finds himself trying to unmask a killer – not easy when no one is who they are pretending to be.

Lady Magdalen is a real figure from history, as was Spero Pettingar. He was reported as being at a meal with the Gunpowder Plotters on the 24th of October 1605, a meeting which was overheard and reported, but though they were all using code-names, he doesn’t match up with any of the known conspirators. Even under torture, none of the others admitted to knowing who he was.

In the first book in the series, The Drowned City, Daniel, incarcerated in Newgate Gaol, is offered the chance to save himself by King’s James’ advisor, Charles FitzAlan, if he agrees to go to Bristol and hunt down Spero Pettingar. Bristol lies in ruins because in January 1606 a devastating tsunami had swept up the Bristol channel. The tsunami struck a year to the day when the first of the gunpowder plotters, who many believed were innocent, were executed and people were whispering that this destruction could be God’s vengeance.

The tsunami wasn’t the only natural disaster to hit England that year. Traitor in the Ice is set ten months later, in the first of the Great Frost winters, when England was in the grip of a cold so intense that the Thames froze solid enough for people to ride horses across it and hold hog-roasts on the river. And Battle became a cage of ice from which neither victims nor a killer could escape.

If you visit the town of Battle, you could explore some of the places that feature in Traitor in the Ice, though hopefully in warmer weather than Daniel suffered! The churchyard of St Mary’s Church is the scene of several macabre events in the novel. If you’re there at night, as Daniel is, it can be really eerie.

At the entrance to Battle Abbey is the old courthouse where Daniel finds himself arguing for a woman’s life, and next to it is the gatehouse where Daniel first encounters Lady Magdalen and her merciless chaplain Richard Smith, also a real historical figure. Battle Abbey was said to contain a subterranean passage through which priests were smuggled into England, but this and the Lady Magdalen’s sumptuous secret chapel have yet to be uncovered. Imagine what secrets they could reveal!