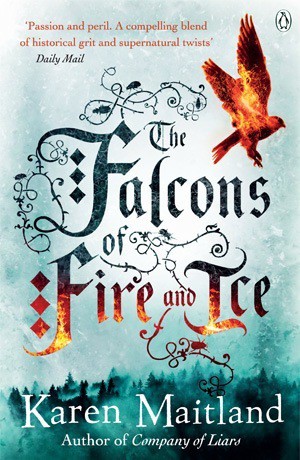 The inquisition displays its power and ruthlessly spreads fear. Heretics are tortured and burned. Any who opposes the Church quickly realizes that silence is preferable to a slow and agonising death.

Isabela, daughter of the Falconer at the Royal Court, is about to be caught in the Church’s terrifying plot. The slaughter of two of the King’s precious white falcons sees her father arrested and imprisoned. As punishment, he and his family will be killed unless the birds are replaced.

Isabela, young and headstrong, decides that only she can save her father. These birds are impossibly rare and she will have to travel far and into strange lands to find them to clear her father’s name. It is a journey that will take her into a dark and dangerous world filled with menacing people driven by fearful beliefs.

And, unfortunately for Isabel, The Church has sent a companion to ensure she never returns…

Set in Portugal and Iceland, Falcons of Fire & Ice was published on 16th August 2012.

Falcons of Fire & Ice has been chosen by two of The Booksellers independent panel, Emma Giacon, Book Content Manager of Amazon and Sarah Clarke, co-owner of The Torbay Bookshop, as amongst their top choices of forthcoming novels.

I posted a guest-blog about the background and influences behind Falcons of Fire & Ice to on the crime and thriller book website –  Shots Magazine and also at book fanatics website the Book Smugglers website. Thanks to the hosts of both of those websites for inviting me to guest blog on their brilliant sites.

Read an extract of Falcons of Fire & Ice (PDF download)