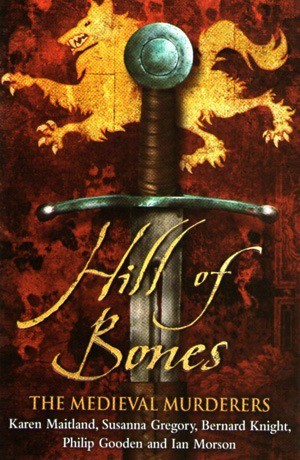 Cerdic, a young boy who has the ability to see into the future, has a mysterious treasure in his possession. A blind old woman once gave him a miniature knife with an ivory bear hilt – the symbol of King Arthur – and told him that when the time comes he will know what he has to do with it.

But when he and his brother, Baradoc, are enlisted into King Arthur’s army, he finds that trouble seems to follow him wherever he goes. When Baradoc dies fighting with King Arthur in an ambush of the Saxons on Solsbury Hill, Cerdic buries the dagger in the side of the hill as a personal tribute to his brother.

Throughout history, Solsbury Hill continues to be the scene of murder, theft and the search for buried treasure. Religion, politics and the spirit of King Arthur reign over the region, wreaking havoc and leaving a trail of corpses and treasure buried in the hill as an indication of its turbulent past.

Prologue:
In which Philip Gooden relates how two young brothers from Somerset travel to join King Arthur’s forces in a final battle against the Saxon invaders.

Act One:
In which Susanna Gregory describes how Sir Symon Cole and his wife Gwenllian are ordered by King John to investigate the suspicious death of Bath Abbey’s unpopular prior.

Act Two:
In which Bernard Knight records how treasures from Bath Abbey are stolen and a how a cat-catcher and a royal steward help a luckless lay-brother to avoid a hanging.

Act Three:
In which Karen Maitland tells how the mysterious survivor of a shipwreck flees to Solsbury Hill to escape his nemesis, only to find himself unwittingly embroiled in a plot of treachery and treason.

Act Four:
In which Philip Gooden recounts how Nick Revill arrives in Bath with the touring players and swiftly finds himself persuaded to impersonate a dying man’s son and comes into possession of a dangerous secret.

Act Five:
In which Ian Morson describes how Joe Malinferno and his companion, Doll Pocket, find themselves in Bath escaping Joe’s dalliance with the Cato Street Conspirators. Unfortunately, the threads of Radical agitation follow them, and they are faced with solving a murder which casts a shadow over a very senior member of the royal family.

Epilogue:
In which Bernard Knight reveals an unexpected ending when police and archaeologists investigate the top of Solsbury Hill.