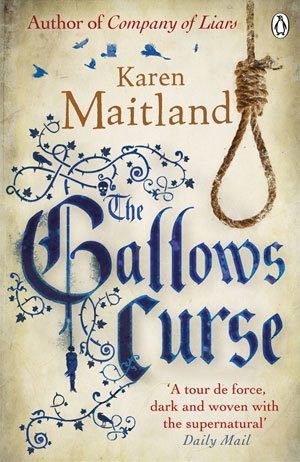 The Thirteenth century has just begun and King John has fallen out with the Pope, leaving babies to lie unbaptised in their cradles and corpses in unconsecrated ground. Across a fear-ravaged England, people are dying in sin.

And into the Norfolk village of Gastmere comes a new Lord of the Manor – the cruel and bloodthirsty Osborn, not long returned from crusading. Spying treachery at every turn, he is prepared on the slightest pretext to damn anyone to hell and the scaffold.

So when Elena, a servant girl, is falsely accused of murdering her child, she is convinced she will be next. But there are others who will defy Osborn’s brutal regime to save a girl who once took part in the secrets and strange rituals of the manor…

Read an extract of The Gallows Curse (PDF download)

How The Gallows Curse came to be written

I always start looking for ideas for a new novel by finding a contemporary issue that intrigues me and then searching for parallel event in medieval times.

In this case I was thumbing through one of those ‘true-story’ magazines in the hairdressers and I came across a feature about a woman who had been given an organ transplant from an unknown donor. She said that she thought she was beginning to take on the personality of the unknown donor. She now like certain foods she hadn’t before, and disliked those she had once liked.  Her taste in music also changed and many other small details. True or not that intrigued me as an idea.

Her story reminded me of tales I heard about sin-eaters in Britain right up until the last century. They took away the sins of those who had died unshriven, by taking those sins into their own souls. This is a very ancient custom, and has been practised in Britain right up to the last century as shown by a letter to The Times 5th March 1950 written by a man who recalled his father talking about a sin-eater he knew when he was a boy.

But sin-eating became really important in the reign of King John under the Interdict when there were no priests to absolve the dying and people were tricked into becoming sin-eaters. Imagine what effect would it have on you, if you took on someone else’s sins or crimes, and didn’t know what terrible crimes the dead person had committed? Imagine your fear if you believed you would be punished in the next world for someone else’s sin.

In the time of King John, the French were planning to invade England to ‘liberate’ the English people from a cruel and wicked tyrant. Unfortunately the English people regarded the French army not as potential liberators but as terrifying invaders. This struck me at as very similar to what has happened recently over the West’s intervention in deposing Sadam Hussain. Another interesting parallel with modern times.