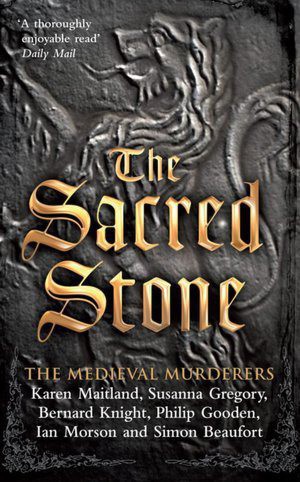 The Sacred Stone, the sixth collaborative novel by the Medieval Murderers, and the first to which I have contributed, is now available in paperback. The Sacred Stone was originally published by Simon & Schuster on July 8th 2010, in simultaneous hardback and trade paperback editions, which are still available.

In the desolate wastes of Greenland, Viking hunters watch a meteorite fall to earth. The finding of the strangely shaped stone seems to bring good fortune to the little community, healing a lame boy and giving them unusual luck in hunting, but violence quickly follows as men fight for control of the sacred stone.

The sacred stone is brought to England on a Viking ship, and passes from owner to owner down through the ages from Medieval Wales to Elizabethan London in an intriguing series of interlinked mysteries.

Along the way the meteorite falls into the hands of mad monks and kabbalists, thieves and murderers, for men and women will stop at nothing to gain possession of it. For though some try to use the sacred stone to heal and to give hope, its very power always awakens the dark side of men, bringing envy, greed and murder in its wake.

Prologue: Greenland, 1067: by Susanna Gregory
In which the stone is discovered by a band of hunters

Act 1: Welsh Border, 1103: by Simon Beaufort
In which the stone causes a rift between Church and State

Act 2: North Devon, 1236: by Bernard Knight
In which the stone is invoked to heal a manor lord’s sick wife

Act 3: Norwich, 1241: by Karen Maitland
In which the stone is acquired by a Jewish merchant

Act 4: Oxford, 1272: by Ian Morson
In which the stone finds its way to King Henry’s bedchamber

Act 5: London & Jersey, 1606: by Philip Gooden
In which the stone plays a part in the kidnap of Nick Revill

Epilogue: Present Day
In which the stone resurfaces