My new historical crime thriller, Traitor in the Ice, is the second in the Daniel Pursglove series, and finds Daniel still in pursuit of Spero Pettingar, the only gunpowder conspirator who escaped the clutches of spymaster, Robert Cecil. Daniel is ordered to inveigle his way into Battle Abbey, which in 1607 was home to a remarkable widow, Lady Magdalen, Viscountess Montague. At nearly 70, Lady Magdalen defied the authorities by hiding fugitive Catholic priests within her household, smuggling Catholics in and out of England, and holding forbidden Masses in her secret chapel for as many as 120 people, all right under the noses of those sent to trap her. Daniel is dispatched to Battle to uncover proof of treason, but finds himself trying to unmask a killer – not easy when no one is who they are pretending to be.

Lady Magdalen is a real figure from history, as was Spero Pettingar. He was reported as being at a meal with the Gunpowder Plotters on the 24th of October 1605, a meeting which was overheard and reported, but though they were all using code-names, he doesn’t match up with any of the known conspirators. Even under torture, none of the others admitted to knowing who he was.

In the first book in the series, The Drowned City, Daniel, incarcerated in Newgate Gaol, is offered the chance to save himself by King’s James’ advisor, Charles FitzAlan, if he agrees to go to Bristol and hunt down Spero Pettingar. Bristol lies in ruins because in January 1606 a devastating tsunami had swept up the Bristol channel. The tsunami struck a year to the day when the first of the gunpowder plotters, who many believed were innocent, were executed and people were whispering that this destruction could be God’s vengeance.

The tsunami wasn’t the only natural disaster to hit England that year. Traitor in the Ice is set ten months later, in the first of the Great Frost winters, when England was in the grip of a cold so intense that the Thames froze solid enough for people to ride horses across it and hold hog-roasts on the river. And Battle became a cage of ice from which neither victims nor a killer could escape.

If you visit the town of Battle, you could explore some of the places that feature in Traitor in the Ice, though hopefully in warmer weather than Daniel suffered! The churchyard of St Mary’s Church is the scene of several macabre events in the novel. If you’re there at night, as Daniel is, it can be really eerie.

At the entrance to Battle Abbey is the old courthouse where Daniel finds himself arguing for a woman’s life, and next to it is the gatehouse where Daniel first encounters Lady Magdalen and her merciless chaplain Richard Smith, also a real historical figure. Battle Abbey was said to contain a subterranean passage through which priests were smuggled into England, but this and the Lady Magdalen’s sumptuous secret chapel have yet to be uncovered. Imagine what secrets they could reveal!

I am absolutely thrilled to be making a return visit to the beautiful island of Alderney for a one-day special event, a brand new biennial festival Literally Gothic. I will be talking about –

“Devilish plots” and “monstrous aberrations”:  Making monsters of man and nature in the 1600’s.

What better time to explore gothic literature than in October, when the dark nights are creeping in. I’ll be in the company of some wonderful authors, who will be talking part on the day – Rosie Garland, Andrew Hurley and Anna Mazzola and the festival will be opened by Xavier Aldana Reyes, who lectures in Gothic Literature at Manchester Metropolitan University.

“Research and the Historic Novel Event”

I am really excited to be taking part in very special event for the Shrewsbury Festival of Literature with Kate Innes, author of the medieval novels – “The Errant Hours” and “All the Winding World“.

The Cadfael archives of great medieval crime novelist, Ellis Peters, are housed in Shrewsbury Library. They are rarely on display, but as part of the festival they will be on show in library and will form the background to our event. I am a huge fan of the character Brother Cadfael and of the amazingly vivid world that Ellis Peters brought alive for us. So, I feel like a child in a toyshop at the prospect of being able to see these archives.

Kate and I will be talking about the research that forms both the background and inspiration for our novels and how the material we’ve discovered in libraries and other archive sources have influenced our writing, and shaped the plots, characters and ideas for our novels. Kate will be telling you about her research into the Templars for her new novel and I will be talking about the Sisters of the Knights of St. John, the Great Famine, the tinners and cunning women who feature in my novel “A GATHERING OF GHOSTS”, and how I researched the medieval backgrounds to my other novels.

I do hope that you can come along and take this wonderful opportunity to see the Cadfael archives, as well share a morning with us.

​​I am so delighted to be joining the distinguished writer of medieval crime fiction and fellow Medieval Murderer, Michael Jecks in a double-bill event hosted by the wonderfully named Dogberry & Finch Books. This is a new independent bookshop which has opened this autumn in Okehampton, Devon. It is fantastic to have a bookshop opening, when so many are closing, so if you find yourself in Devon in the next few months, please do pop in and cheer them on. And I hope you can come along on Saturday 30th November too. Mike and I would love to have your company.

Karen recently visited Audible to talk about THE PLAGUE CHARMER. Listen in here! 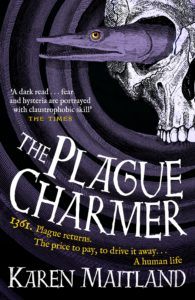 A free e-short which unveils the dark historical context to Karen’s new novel, The Raven’s Head.

Alchemy. The word conjures up images of magic, mystery and dark dungeons full of bubbling potions, with shadowy figures poring over ancient manuscripts in pursui of the secret formula that will allow them to turn base metal into pure gold. And, for centuries, this image of alchemy was not far from the truth…

Take science and politics. Mix with desire and desperation. Leave to intensify. And you shall have the legendary world of the medieval alchemists, expertly drawn by the Queen of the Dark Ages.